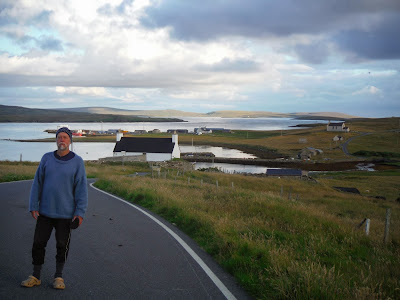 A few days later we were back on Yell, camping at Cullivoe, 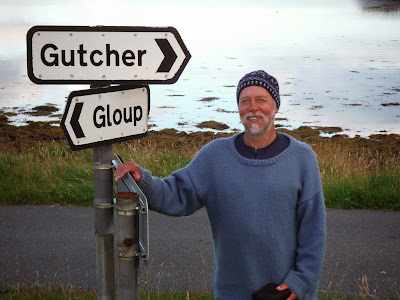 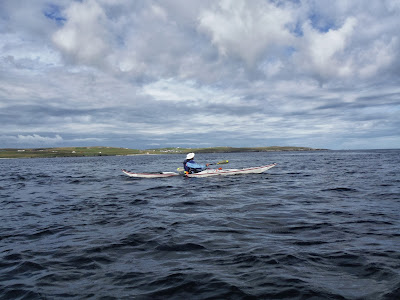 It was the usual sunny start as we criss-crossed Bluemull Sound looking at the Unst coast as well as Yell. 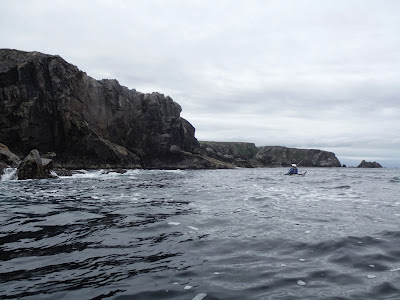 The forecast was for rapid deterioration as a sou-wester came in, but the north coast was sheltered. 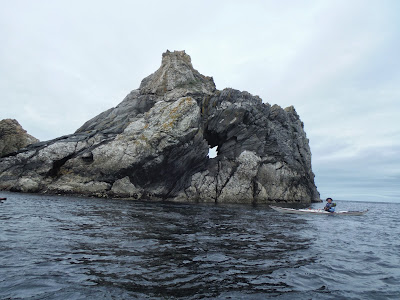 The Quidin is an interesting rock with a singular geology. 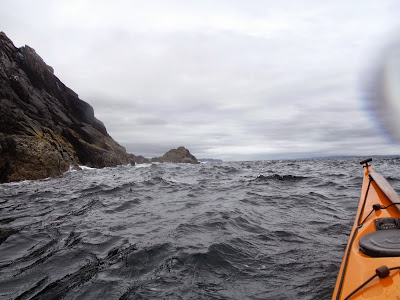 The corner to the west coast is a collection of arches and stacks. Liz had a 'moment' in the arch as a wave tried to surf her up the wall against her hanging draw, and one look at the sea to the south convinced us it was time to turn back. 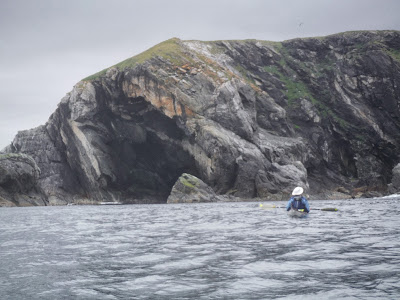 The islet of Gloup Holm and the coast looked more and more austere as the wind got up. We were pleased to have left a car at Gloup against the possibility of an 'early bath'. That rugby phrase may be only too appropriate for a kayaking trip.

The Gloup memorial gave us food for thought. 58 fishermen lost to a sudden summer storm on the far haaf in 1881, miles out to sea in their small rowing boats.  Where might we have been without the Met. Office inshore forecast....

Shetland: The sun shines on Yell

The last time I was on Shetland, Yell and Unst were only served by the thrice weekly Earl of Zetland passenger boat from Lerwick. How times have changed, and I'm not that old! Frequent car ferries now link the islands and visitors can go south to north, and maybe back, in a single day. 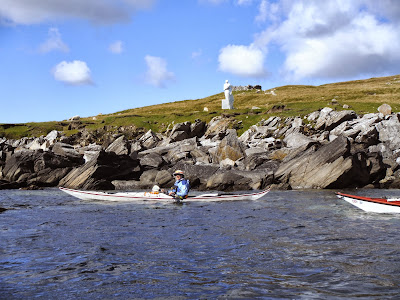 The White Wife is a ships figurehead raised on the shore where the ship foundered on the east coast. 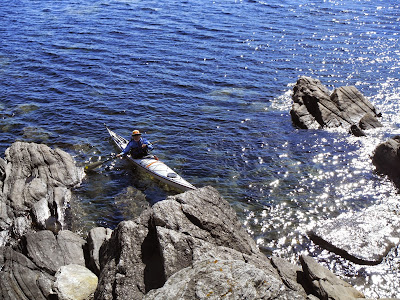 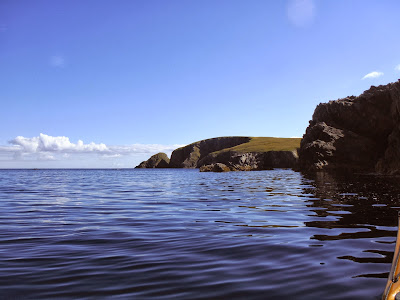 relaxing paddling on a windless sea. 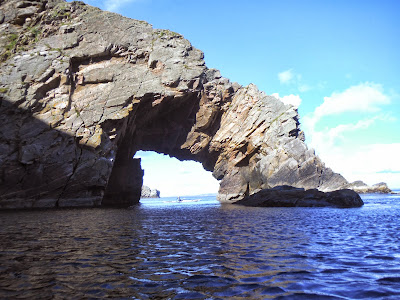 The usual arches; this one is one of the legs of the Horse of Burravoe, it doesn't look much like a horse from the sea. Unusually it is named from its look from the land. 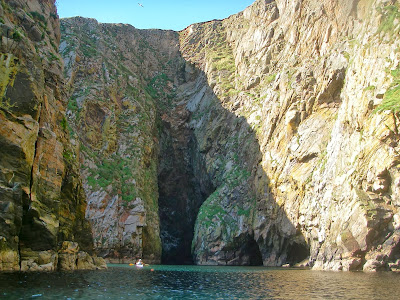 Spectacularly coloured cliffs with the only kittiwake colony we came across. The White  Lady is near here, a light coloured patch of rock said to exactly resemble a Shetland lady in traditional dress, lacking fashion expertise we couldn't pick it out, but the bay below, Ladies Hole, is an anchorage. 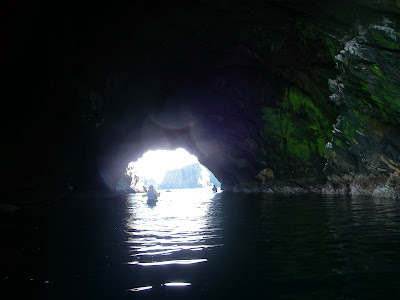 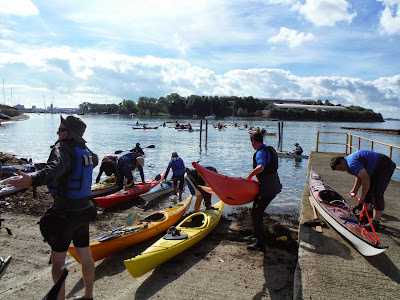 Sunday was almost too warm, in fact those in drysuits were forced to roll from time to time. We had 50 members at the AGM and 36 took to the water afterwards. 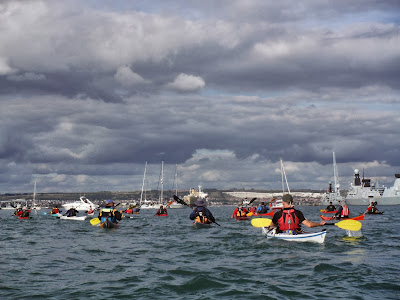 What a great final day of summer for 2013

Shetland: Hillswick, Eshaness and The Faither 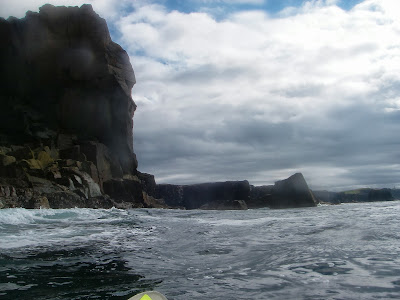 Eshaness is justifiably a well known paddle. The view from the lighthouse (extreme right if you click on the photo) is said to be iconic for the land based visitor, but the view back towards it from a kayak is even better. However, we enjoyed the bits of coast before and after most. 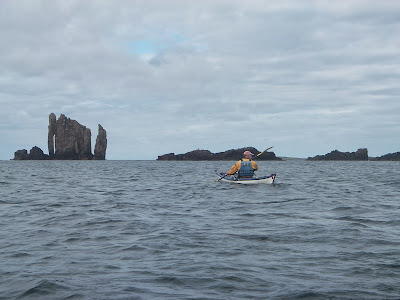 Not Hillswick and the mysterious swell swept Drongs, nice as they are. 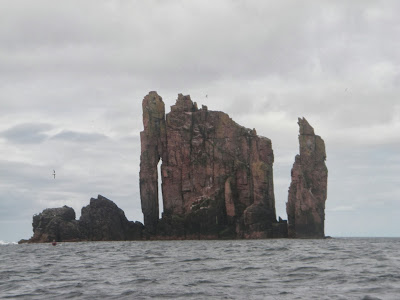 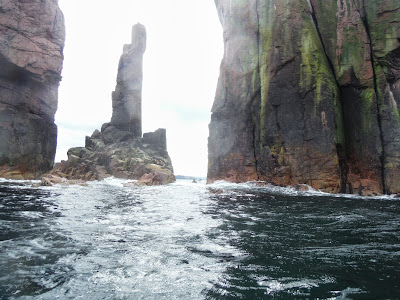 We met an otter mother and cubs on a ledge in a cave as well as the maze of arches and stacks, 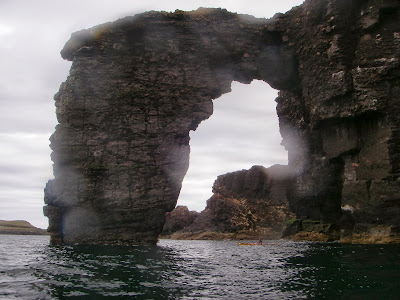 No, despite some rain, it was the black lava walls of this 40m high arch on the corner of the small islet of Dora Holm 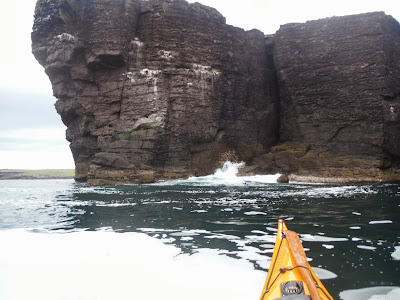 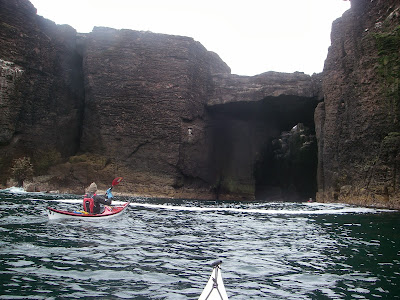 which had an impossible grandeur. 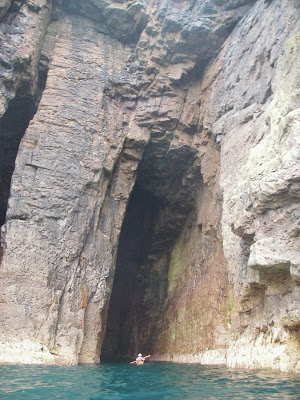 Then the coast north of Eshaness between Hamna Voe and The Faither is just amazing and much less frequented. 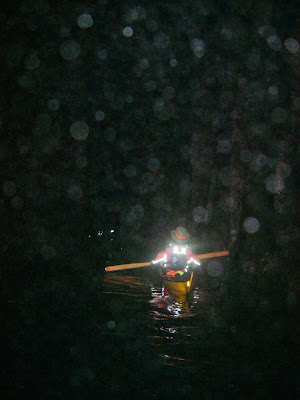 Caves so large, some joining at the back or by cross passages, some eventually coming out into daylight behind the cliffs. Liz did a good manoeuvre here, the back of two caves were joined by a gap in the curtain of rock but I could see, dimly by my headtorch, a wide rock ledge appearing when the swell was down. So I paddled out of one and back into the other, imagine my surprise to see Liz already in there. She had been having a look at the feasibility of floating over with the swell and the swell had taken matters into its own hands... 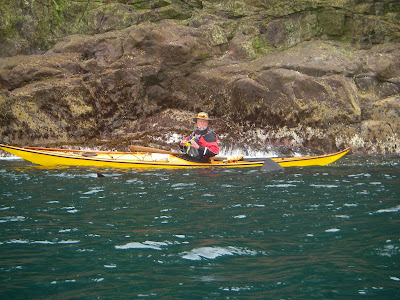 A 6m basking shark pinched me against the cliffs near The Faither, the currents had concentrated porpoises, jelly fish, fish and the sea birds along this shore. 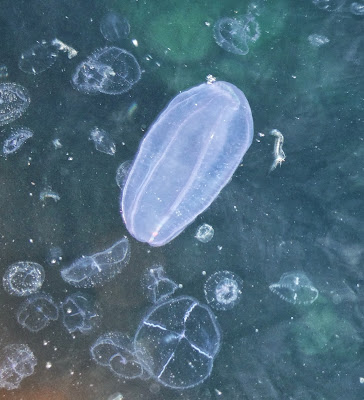 Many of the miniature jelly fish appeared to have lights running up and down them, but they were invisible deeper into the caves, so it was probably reflected sunlight rather than luminescence. 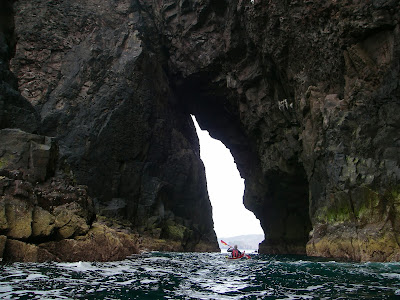 The Faither itself is pierced by this arch, leading to further marvels in Ronas Voe.
Posted by Peter Bisset at 17:26 No comments:

Sprinting from Lymington to Yarmouth 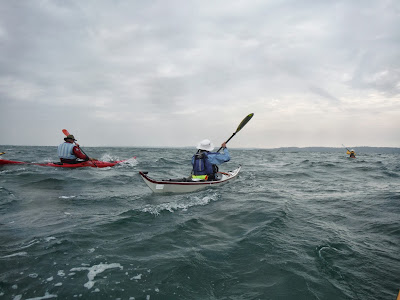 Everyone put their foot down on the way across to Yarmouth on Sunday, 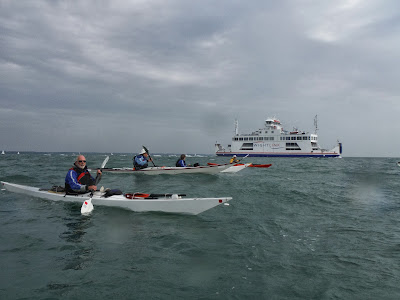 but Wightlink still managed to overtake with ease. We had hoped that the easterly f4 would lead to interesting conditions at Hurst Castle once the tide turned but the wind died and it was even flatter on the way back.
Posted by Peter Bisset at 16:24 No comments: