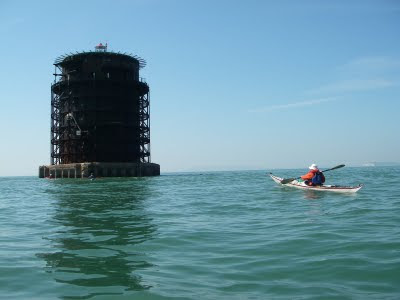 We paddled out to the Nab Tower at the weekend, this is about 7nm off Chichester entrance or some 9nm from Portsmouth, but only 4.5nm off Bembridge, Isle of Wight, you can see Culver cliff in the distance. Conditions turned out very benign with a light SE wind and a sea breeze which never really filled in. The tides run south-east, then east, then north-east, north, north-west, and then west, so a circular route from Portsmouth to Chichester Entrance via the Nab makes the most of any assistance. The Nab looks as if it is right in the middle of the shipping lanes, but most vessels pass to the west of it and the occasional deep draft vessel passing east follows the tightly buoyed Nab channel. An approach from Dean Tail keeps you clear of most shipping, but a sharp look out and listening watch on the VHF are still essential. From Bembridge you have a more than 3 mile right angle crossing of water plied by big and fast cross channel ferries to negotiate, although the bigger ships and those with hazardous cargo are more predictable, passing east of the New Grounds cardinal. 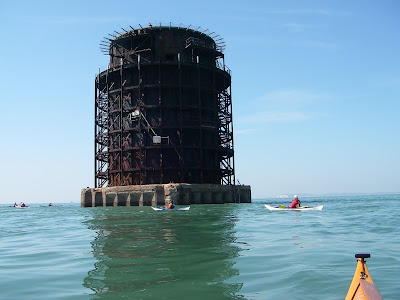 The tower itself is very rusty and looks as if bits might fall off if you tried to land. The flooded concrete base, much larger than the tower, creates a swirling eddy as water is forced up and around. A peregrine was in residence and swooped over head checking us out. Trinity House maintain the historic folly as a light house; 1 million pounds in 1914-18, the war over and its purpose redundant before it was completed. 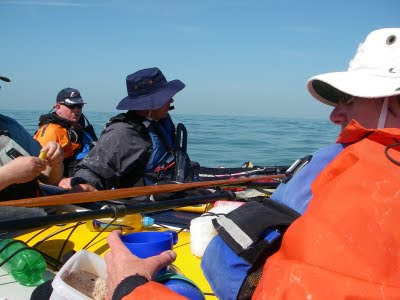 We didn't land, but lunched on the water, gaining 0.5nm in the process; and even experimented with different sea-pee techniques, men only need 2 -3 star ability, but it is 5 star stuff for the ladies!

Once back at Chichester Entrance with the option of a short wait for the tide to turn westbound back to Portsmouth, or continuing with the last of the flood and then the ebb around Hayling Island. We choose the latter making it a more than 23nm paddle. Despite being with the tide all the way, it felt like a long day out on the water. Mike recorded this GPS trace, various halts and the lunch stop are visible by the kinks as we drifted with the tide.

Posted by Peter Bisset at 17:08 No comments: