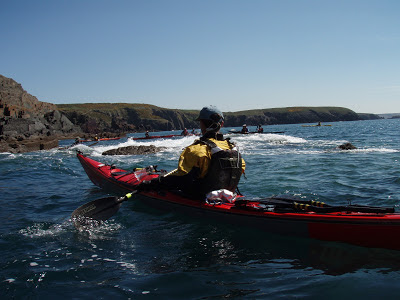 We spent last week in Pembroke, varied paddling ranging between the Bitches on a 7.2m tide to Haverfordwest town centre. Rock hopping along the coast, I came round the corner to see the group gathered around a friendly looking rock. Taking instant advantage of a large set I surfed through the gap. It started off well, that's me in the hat, middle ground, surfing the wave. 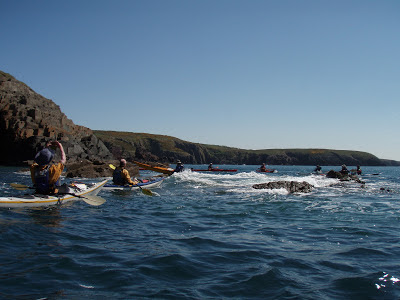 Moments later a strong surge from the side left me high and dry. Subsequent waves barely reached my waist and I had to bail out backwards into the sea, lift the boat off and get back in on the water. Barely a scratch on the gelcoat- more by luck than judgement.

Everyone had been gathered around because a second before I rounded the corner, Clare had very nearly come to grief in the self-same spot. From one of the onlookers:

Porth Clais to Solva
As the last trip of what had been a fairly strenuous week for most, a majority probably would have been contented to gently rock hop their way to Solva and back admiring the fantastic rock formations and the flowers clinging to the cliffs and enjoying a leisurely lunch on the beach in the unaccustomed sunshine.'They' however had hinted darkly that rescue practice was also on the cards. Peter had clearly sensed this lack of enthusiasm amongst the rank and file and decided to take matters into his own hands by getting his bow stuck on a rock.

As the wave that had planted him there receded he was left not only at a startling angle but also still well attached. In the end he was forced to abandon ship having demonstrated a sense of balance that suggested that his true vocation should have been in a circus. The rest of us fought over rescue rights like vultures over a dead goat. Liz was heard to mutter that perhaps next time we'd leave him there as he was worth more dead than alive anyway. It was one of those days when one realizes what a wonderful sport sea kayaking is and hopes that the rest of the world don't find out.

Photos by John B.
Posted by Peter Bisset at 15:54 No comments: