Nice wintery light as we set off, 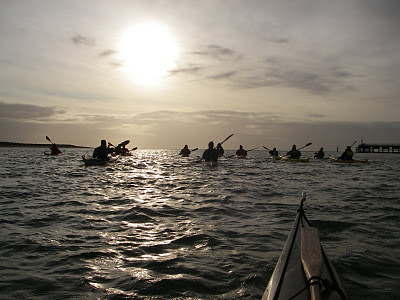 and some nice waves to play in.

More details here.
Posted by Peter Bisset at 12:39 No comments: 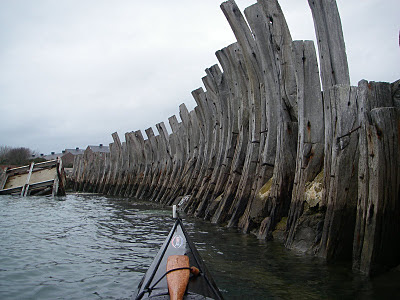 Where can you paddle into the rib cage of a wooden ship, 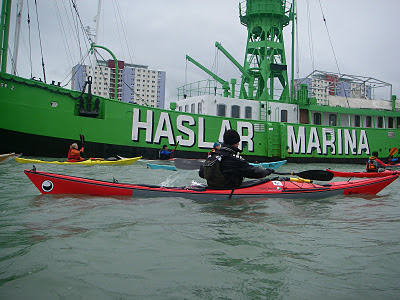 come alongside a lightship, 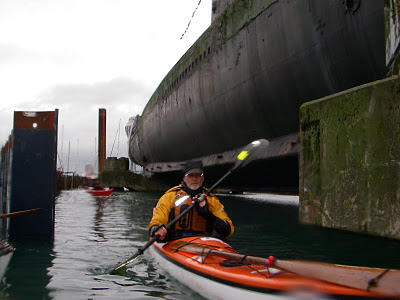 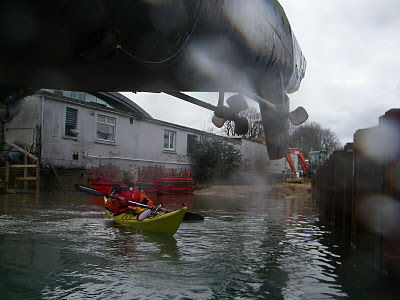 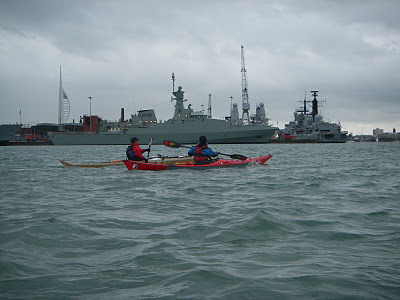 and past the pride of the Royal Navy? 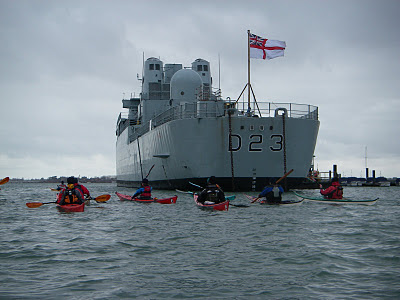 Portsmouth Harbour on a Winter's day.
Posted by Peter Bisset at 17:36 2 comments:

A calm evening amid the gales 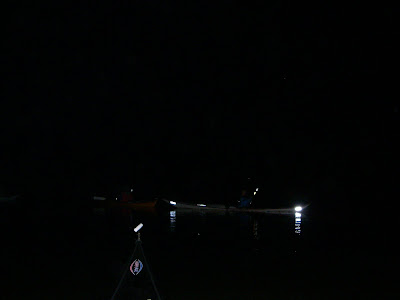 Even in the South, the wind had been gusting 40kt during the day on Wednesday, with storm force 10 winds forecast for Thursday. We decided on the shelter of the Hamble for our usual evening paddle. Despite the smoke from the Fawley stacks blowing horizontal down at the entrance of Southampton Water, it was almost calm up here.

The water carpeted in leaves torn from the trees, 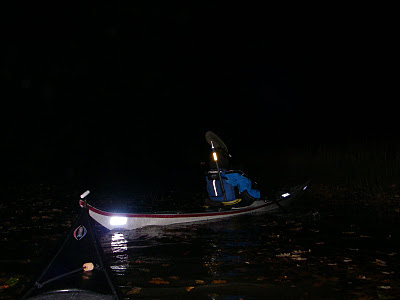 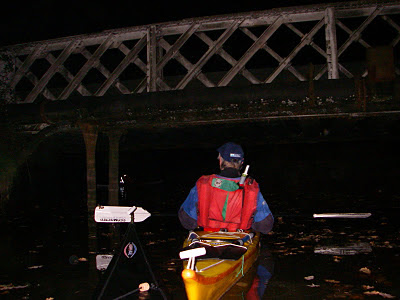 On reaching Curbridge, it was disappointing to find that the waterside pub the Horse and Jockey was closed.
The strong winds in Scotland remind me of a camping trip in 1979. I was on my own, camped near the ruined sheiling below Coire Gaothach on the NE side of Ben Lui, and had spent a couple of days on the icy ridges and gulleys of this fine N face, unexpectedly cold and snowy for late November. Coming out onto the summit, I was suddenly struck by strong winds, and decided that the steep slopes were no longer tenable. My plan was to descend via the SE ridge to the col between Ben Lui and Ben Oss, drop into Coire Laoigh and descend the burn to my tent. The wind was knocking me off my feet on the ridge. However, as I reached the flat col between Ben Lui and Ben Oss the wind changed character from being powerful, but somehow enjoyable, to downright dangerous. I was fighting for my life in a swirling tide race of wind pouring from the SW between the mountains. It was difficult to breathe because of the low pressure across my face, lying flat out, my ice axe pushed right into the snow under me in the gusts, barely able to make a controlled belly slide in the lulls. The wind had picked up bits of ice, snow, peat, anything it could tear out of the ground, so I was being paint-ball machine gunned, with no way of fighting back. Flattening myself lower and lower on the snow, making progress a metre at a time. The wind eased a bit as I slid into the relative shelter of Coire Laoigh and my tent was still there. Just as well since that 5km, all downhill and mostly downwind on easy ground, had taken me 5 hours and night was falling.
Next day, with deep drifts of fresh snow, and feeling battered; I decided to stay put and dozed away the day in the tent. In the afternoon, a helicopter overhead sent me scrambling out of the tent to make signs that I was fine. The winchman came down anyway, not at all interested in me as it turned out, they were looking for an RAF Jaguar that had crashed the previous day; but I had neither seen nor heard anything. However, he warned me that more bad weather was on the way and that I would be foolish to stay. I hitch-hiked home after walking out at first light the next day. Central Scotland was suffering a sort of hangover, with broken branches and slates littering the streets.
It turned out that the plane had crashed within a mile of me as I was descending the ridge. The pilot had ejected just before impact and survived but had died of cold, or possibly injuries caused by the parachute dragging him along the ground in the strong wind. Two Jaguars were flying together along Glen Orchy, the lead pilot said to pull up as they were too near the ground for the weather conditions, but when No2 came up above the cloud the leader had vanished and could not be contacted by radio. One of the largest SAR operations in the British mountains in atrocious winter conditions took several days to find the pilot's remains, wedged by the wind in a gulley beside my descent route down the SE ridge. The discovery was made by a civilian volunteer mountain rescue team and caused some controversy because their help had been refused and only RAF and police teams were involved for the first 4 days. It was initially assumed that the pilot was in the wreckage so even the start of the search was delayed until excavation of the crash site revealed that he had baled out. The pilot had most likely died before they started looking for him. Subsequently civilian teams with their expert local knowledge have been involved from the outset in SAR. The wind, cloud and snow had meant I heard and saw nothing, not even the sound of the planes in flight or one hitting the ground close by.
Posted by Peter Bisset at 10:39 No comments:

Undisputed Masters of the Solent 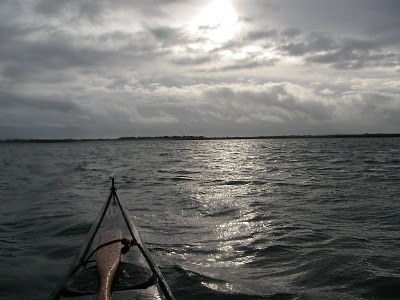 Wintry sunshine and an empty sea now that December is here.
Jet Skis are a distant memory and the last of the yachts and gin-palaces have retired to their winter quarters, leaving us undisputed masters of the Solent: or so it seems. Five months of lone but not lonely paddles under the silver-grey cloudscape. The mudflats alive with the calls of winter visitors....
...Also the season of silly hats... 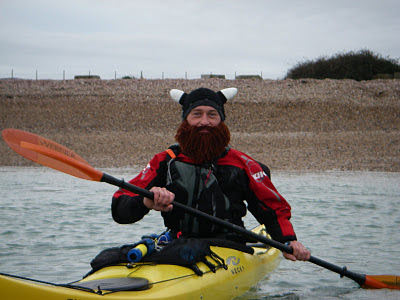 It is always a surprise that first warm weekend of late Spring, to see the hibernating flotillas of sails and noisy motor craft breaking their winter sleep.
Posted by Peter Bisset at 16:44 No comments: